An introduction to hypothesis testing

As part of the ongoing development of our VisiMetrix platform we are faced with the need to make decisions about how best to analyse massive datasets. We want to help users make decisions when looking at data. Sometimes though it’s too expensive to check all the data or it’s so complicated that it's easy to make an incorrect assumption and be led away in the wrong direction.

In cases like this, hypothesis testing can help by providing a degree of confidence that either our observations are real, or the changes we’ve made have, in fact, made a difference.

In cases where a complete examination of the underlying data set is impossible - perhaps all the data is not yet available or is simply too expensive to process all of it - we have found the following statistical tests to be very helpful.

VisiMetrix monitors large telecom networks, and in some cases its data will suggest that new software or hardware elements should be added to the network to improve overall performance. Since changing telecom networks is costly, we need to determine whether this change would be worthwhile by verifying that a sizeable proportion of the underlying traffic matches a well-defined profile. Unfortunately, checking such vast quantities of data is extremely compute and time-intensive.

In cases like this, a test known as the 1-sample Z-test can be applied to a sample of the data to determine if the network infrastructure change is, in fact, worthwhile implementing.

When VisiMetrix draws the attention of a telco’s operations team to a history of PDP creation (user connectivity) errors, they will often apply a configuration change to their underlying network to correct this. However, since things like PDP creation errors are, for the most part, rare, it can be a challenge to validate that a configuration change has, in fact, corrected connection failures for real end-customers.

In cases like this, a 2-sample paired t-test can be applied to samples taken before and after the configuration changes to confirm that any reduction in errors was, in fact, real, and not just a random artifact of the data.

When a telco is planning new hardware deployments, they can use information from their monitoring infrastructure to understand the pre-upgrade state of the network. Looking beyond that they have to make some assumptions about traffic patterns as far as 2-3 years in the future.

They will use these predicted volumes to dimension new hardware, network, and other infrastructure. Once deployed, it is critical to validate these sizing assumptions early on. The challenge, however, is that the traffic soon after an upgrade will be nowhere near the upper limit of what was sized so it would be difficult to tell whether or not the upgrades will be able to support the predicted traffic volumes in the coming years.

The challenge here is to validate the dimensioning assumptions in advance of peak traffic. Using the fact that the proportions of event types should not differ significantly pre and post upgrade we can apply a Chi-Square Goodness of Fit test to the initially limited production data and used to confirm that the observed distribution is as-expected.

Once we know this, we can be confident that the deployed hardware will support the eventual load. This test is performed regularly, to catch any changes in user behaviour over time that might affect the proportions.

The purpose of this series of blog posts is to provide an introduction to hypothesis testing, and the types of problems to which it can be applied. At the end of this post I will present a cheat sheet that will help you decide when to use which type of test. The following posts will go into more depth for each test, and provide a code sample for how to calculate it.

Hypothesis testing is a statistical method that can be used to make decisions about a data set without having to examine every element in that dataset. For example, imagine you have a software system that processes billions of events per hour. Events are grouped into transactions of, say, hundreds of events. Your product owner has identified a candidate product feature that could provide real customer value but only if at least 80% of the transactions over the last 12 months contain events that match a given set of criteria (profile).

Now we have a problem. It will take weeks to check to process 12 months of events.

Why are we bothering to take a sample? Because we want to make a decision, and checking every element in the set might be too difficult (billions of events), or just impossible (testing food means destroying it).

The issues then become:

This can all get very heavy, very quickly, so I’ll give a quick example of what a hypothesis test does. In this example we have a data set that’s so large we can't process all of it to get an answer, so we have to sample it, and then check what conclusions we can deduce from this sample.

What can we say about all these billions of transactions, given what we have learnt about just this sample of 1,000? This is where the null hypothesis and alternative hypothesis come into play.

Technically, this makes this kind of hypothesis test a significance test - we’re not proving anything. We are only deciding that, on the balance of probabilities, given how much risk we’re willing to take, that we’re happy to accept that something is likely enough to be true.

Does that sound vague? It should. There are reasons to be very careful about the kinds of assumptions you should be willing to make based on the results of these tests.

In short, these tests aren’t about certainty, they’re about confidence.

In our example, we would start by assuming this null hypothesis is true:

Exactly 80% of the transactions match the profile

Or in more formal language:

What we want to do now is imagine the following. Note, we don’t actually have to do the following, this is just here to explain to you why this all works. 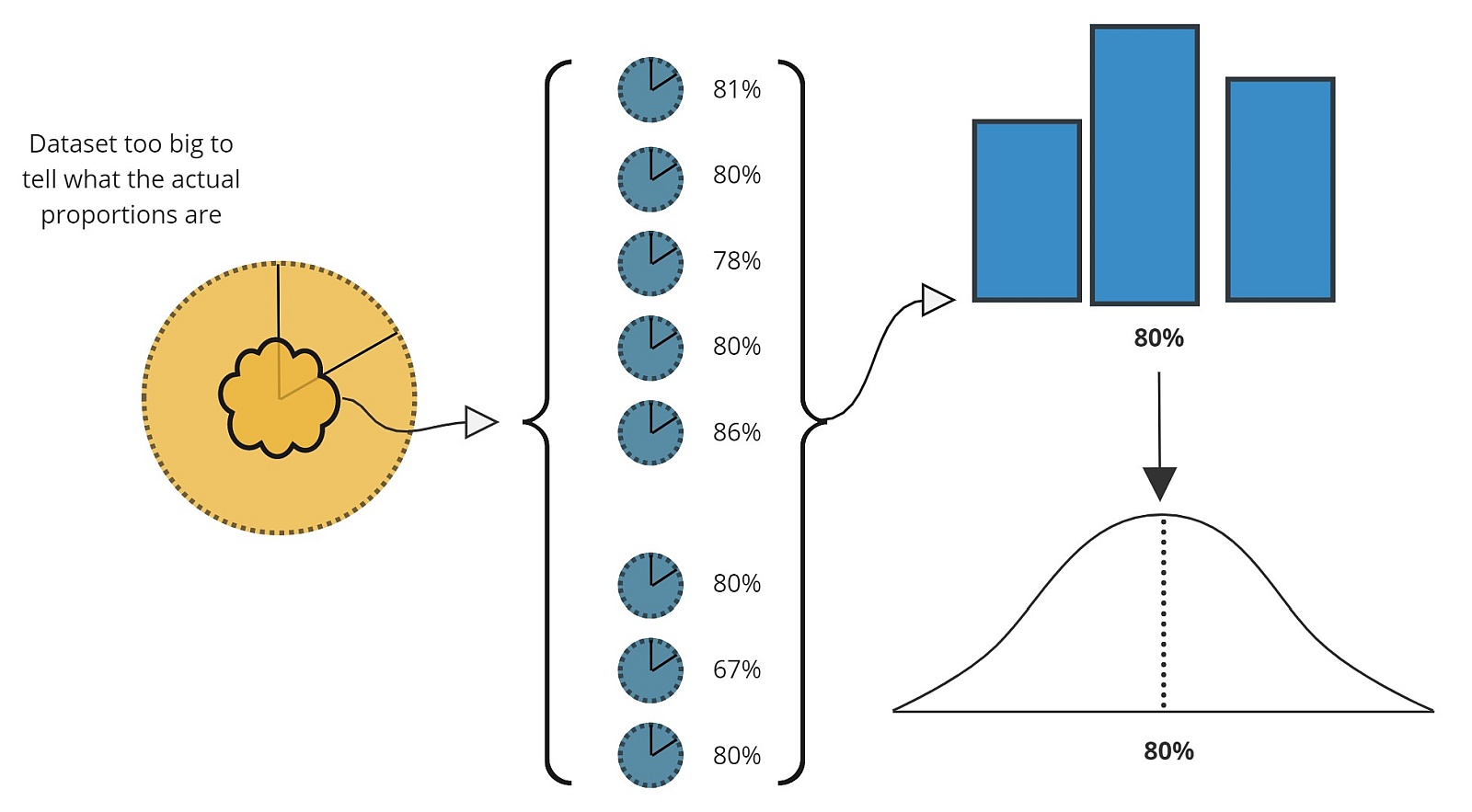 Now we have a curve - for a fictional population that matches our null hypothesis - with which we can compare our sample.

Sample and Compare to Null Hypothesis

In our example, because we have the null hypothesis:

Exactly 80% of the transactions match the profile

We would consider this as our alternative hypothesis:

More than 80% of the transactions match the profile

Or in more formal language:

Finally, we compare our sample proportion (in our example this was 82%) to the curve for the null hypothesis, and we figure out how likely it is that this sample could have come from a population where the proportion was, in fact, exactly 80%. 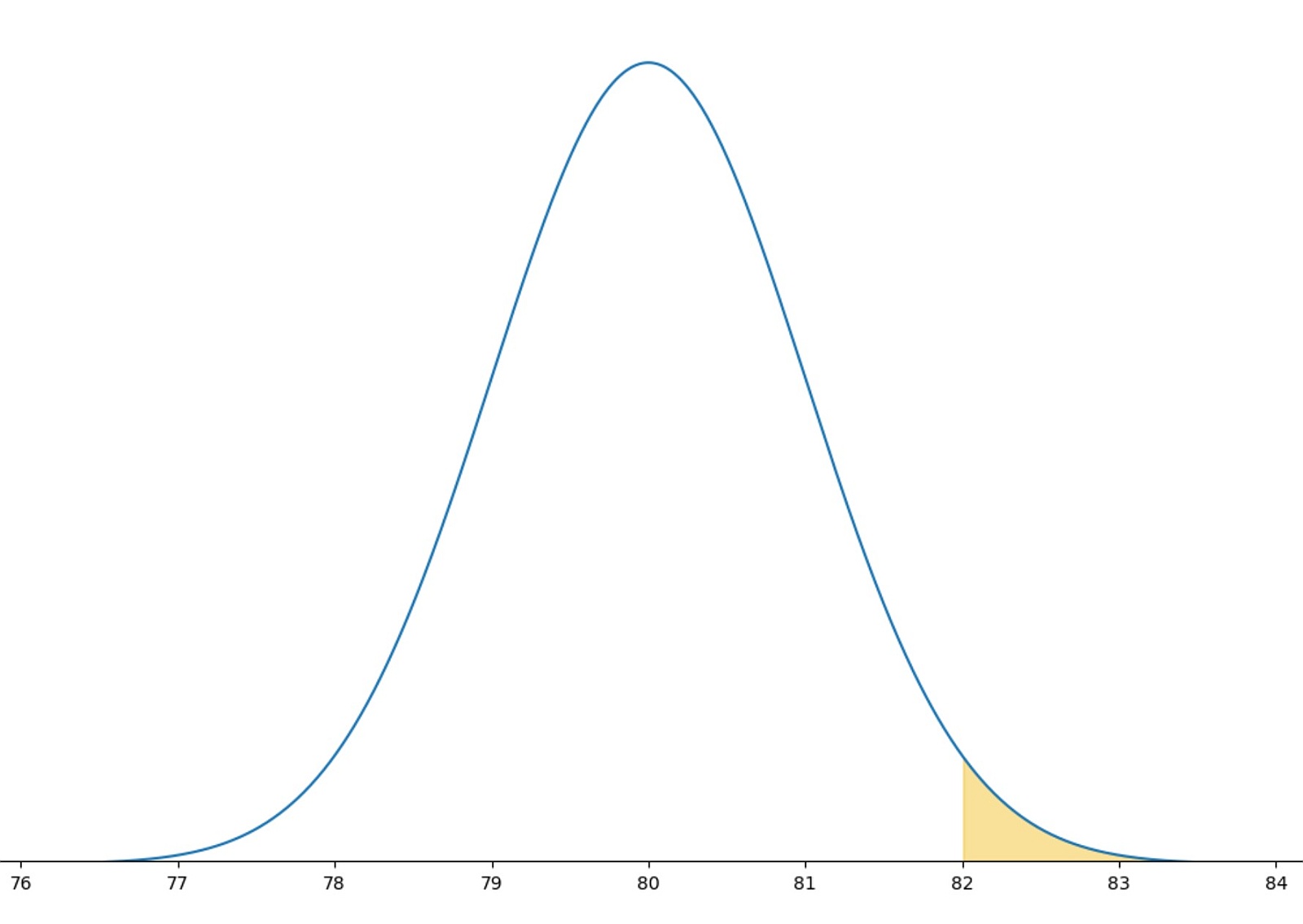 This fraction is the probability of how likely it is that our sample came from a population that had a proportion that matched our null hypothesis.

Drawing conclusions about the sample

All of the tests that follow derive a result called a p-value. These values are often misunderstood. This misunderstanding can lead the tester to make certain assumptions about the underlying population that cannot be justified.

The p-value is the probability that the sample result could have occurred if the null hypothesis were true.

So, a p-value has no meaning outside of the given sample, and cannot be related to any other sample or p-value, and doesn't give an indication of how accurate the sample value is. So, in our example, had we calculated a p-value of 4%, the following significance levels would have caused us to draw the following conclusions:

This above example is for a test comparing proportions, but a different test would be required depending on what it was that you were comparing. This figure below offers a guide as to which test to apply depending on the nature of the data, and the observations you’re looking to make. 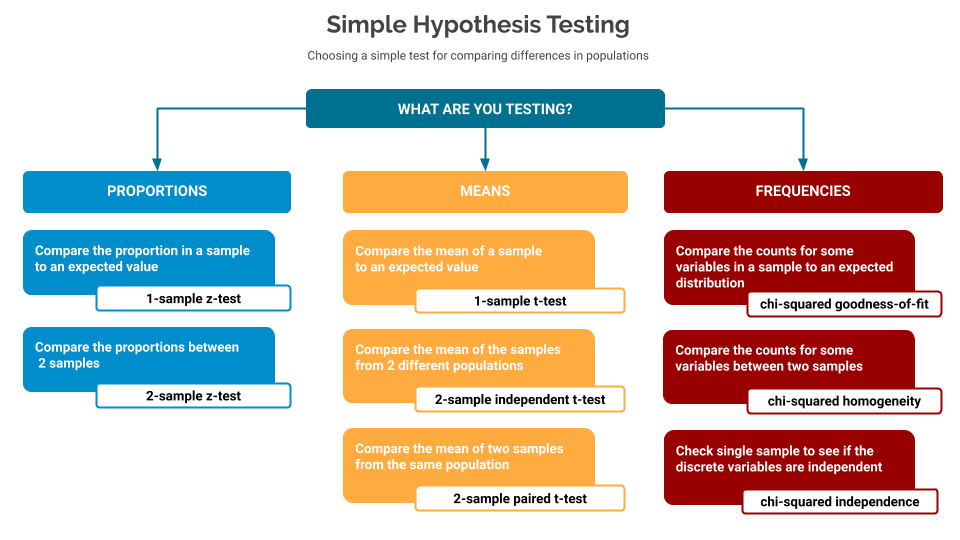 The rest of this series of blog posts will explain - with examples - when each of these different test types is applicable, and will include sample code for each of them.