It is, but I hope that by the end of this blog post you will agree with me. I’m not dismissing quantitative analysis - it’s always better than a gut feeling - but when you analyse data you’re making lots of choices about what tools to use, and what the results mean.

The aim of this post is to make clear the nature of the kinds of choices an analyst will make when examining data, and what responsibility is on you - the reader - to understand these choices before accepting the results of someone else’s analysis.

At a high level, all we mean is that we’ve given our data over to a set of tools that can validly test it, and they’ve given us a p-value for how likely this observation is to be a fluke. From here on, how we interpret this is up to us.

I think it’s best to explain this with a simple example, so you can see what kind of interpretations an analyst will make. If you’re new to this kind of analysis then don’t panic, you don’t really need to understand everything going on in here to get the main thesis of the post.

Finally, there are some tables of data in here, for context, but if this is all new to you then you can skip through them to the text.

Suppose we had two classes in a school that did a few exams in different subjects, and when we got the average score for their tests across all subjects we got results like this. 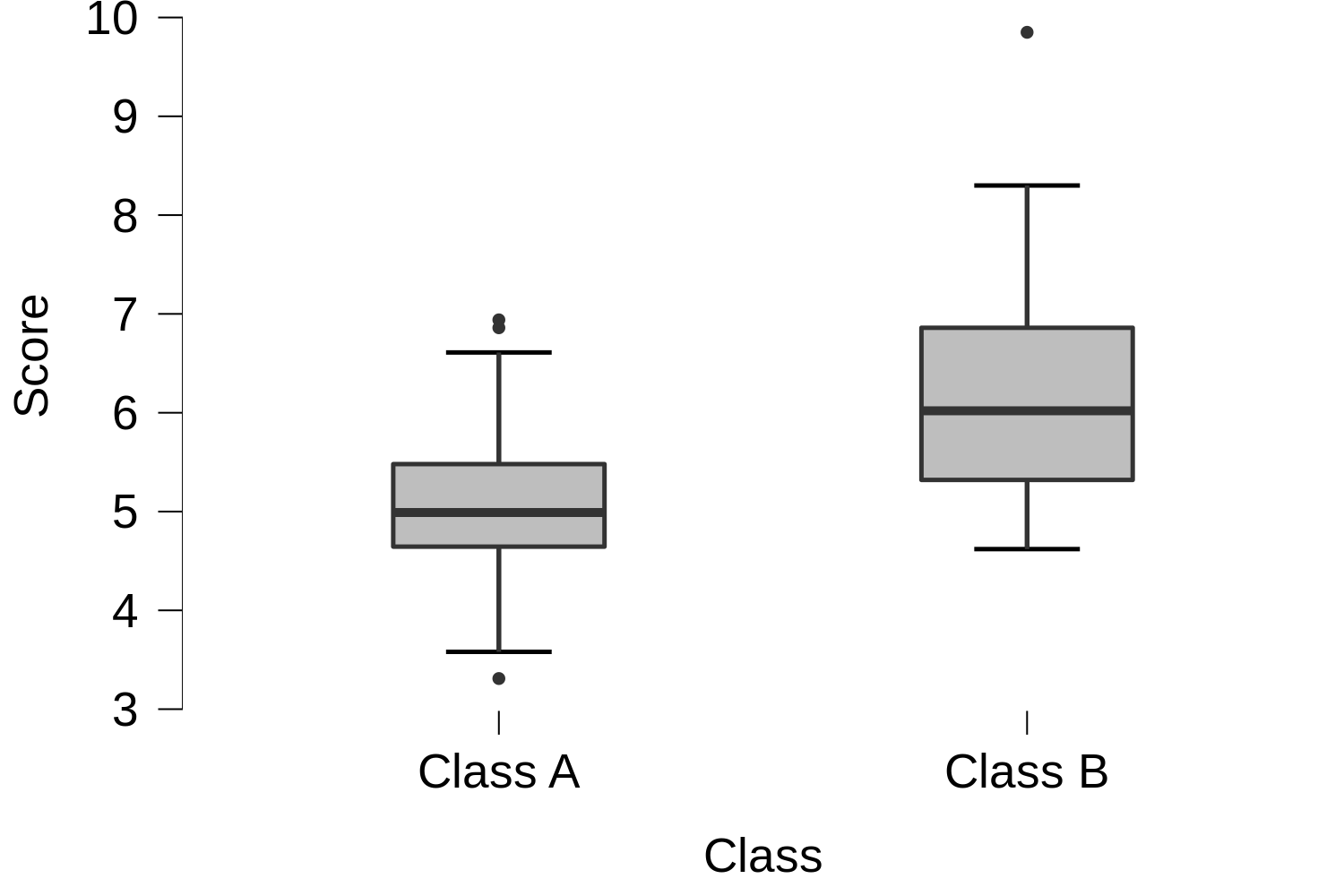 So, it looks like Class B might be getting better scores than Class A. However, as the scores within each are spread out a bit, and there’s a lot of overlap between the two classes, it could be a fluke. Maybe if you tested next week Class A could have done better than Class B.

So, you decide to throw your data into an interaction plot, to see if there’s anything of interest going on when you compare all the classes and subjects at the same time. The result is this:

Now, since the lines aren’t parallel to each other, it looks like there might be some kind of interaction taking place, so we do the full Analysis of Variance test to make sure.

Assuming we’re happy with a significance level of 5%, then the results suggest the following:

Since all ANOVA can do is tell us that there is some kind of interaction between class and subject, we use a post-hoc test to throw some light on which interactions are happening. In this example, we do a Tukey HSD on the interactions to see how all the different class/subject pairs interact with each other. Although the analyst has many other post-hoc tests to choose from.

There’s a lot in here, so let’s focus only on those results we can consider as being statistically significant. These are:

So we could, reasonably, come to the conclusion that:

Of course, had we decided that all the interactions were not interesting, we would have moved onto to doing post-hoc tests on the main effects

So, what’s wrong with this?

Maybe nothing - if our decisions were reasonable - but it should be clear that although we used quantitative methods to decide what was statistically significant, we still made qualitative decisions on what was meaningful.

So, in short, there are three main lessons to take from this: [fusion_table]